Referring to William Blake’s illustration Europe: A Prophecy (1793) showing the god Urizen measuring the limits of the material world with a set of dividers, I surveyed EU subsidy to Scotland at Eoropie beach, Isle of Lewis, Scotland on 29 March 2019, the first delayed date of the UK’s exit from the European Union.

Following on from my visit to Isle of Eigg, where I visually documented the places that M.E.M Donaldson (1876-1958) photographed, I am slowly visiting the other locations she mentioned or photographed in her travel guide ‘Wanderings in the Western Highlands and Islands’, (1921), published by Alexander Gardner Ltd, Paisley). I spent this past weekend in North Ballachulish, which lies five miles from the Corran ferry, which connects to Ardnamurchan. M.E.M. Donaldson would have taken the road through North Ballachulish numerous times, from her early visits to when she finally moved to Sanna Bay, at the tip of the Ardnamurchan peninsula in 1927. Indeed, in her travel guide she recalls,

‘When it was time for the car to start, even quicker sped the glorious journey down the shores of Loch Linnhe to Ballachulish, for all the way along, and increasingly, the scenery is a feast of good things; and whether it be the sea, the distant mountains, or the road itself, every prospect delights your heart’. (P. 269) 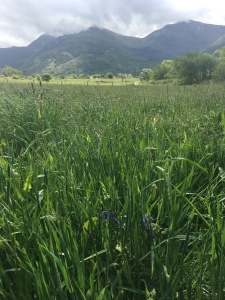 The church door to St Bride’s remained open during my days in North Ballachulish, for curious wayfarers but also, I suspect, for the swallows that were nesting in the rafters of the vestibule. Both Carnglas (also known as Rhuba Mor) and Clach a’ Charra sites are located on private farmland. Donaldson records that Carnglas was a secret outdoor location to take the sacrament; an example of worship in the 18th century when Catholicism was illegal in Scotland.  The ‘soldiers’ she refers to were the Jacobites. Donaldson also mentions earlier in the book that, ‘… in 1768 the Roman Catholic authorities… [built] a college at Buorblach, at the mouth of the Morar river. Here many a ‘heather priest’ was trained, until, in 1778, the college was transferred to Samalaman in Moidart.’ (P. 88). Another example of the ‘heather priests’ being secretly trained in Scotland is at Scalan Seminary, in the Braes of Glenlivet, Morayshire.

‘At North Ballachulish you may see in the summer glorious fields starred with the white and gold of ox-eyes and corncockles, and framed with the vividly bright pink of the wild rose, furrows of meadow sweet beyond the sparkling waters of the loch, and everywhere the towering mountains stretching far up through Glencoe to the wild and lonely expanse of the moor at Rannoch, and to the head of Loch Leven.’ (P. 270) 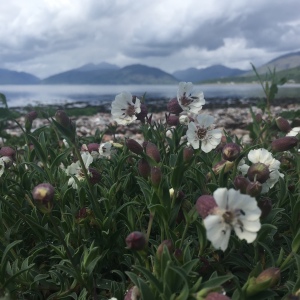 ‘Just about a mile short of North Ballachulish ferry, you pass at the foot of the craggy hillside the beautiful little church of S. Bride… I have been to the Three Hours’ Service on a wet Good Friday at S. Bride’s, and it has been a lesson to see the reverent intentness of a goodly congregation of Highlanders, mostly men, nearly all of whom were present throughout the devotion. (P. 271) 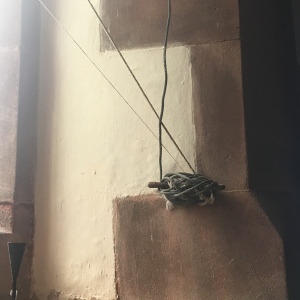 ‘At Onich… standing in a field by the shores of Loch Linnhe, is the noteworthy perforated standing stone called Clach a’ Charra, 6 feet 8 inches high and 3 feet 10 inches at its widest part. This, an irregularly-shaped monolith… has every appearance of having been obtained from the bed of some river which, aided by the action of stones, has worn part of the surface into a hollow and at two points into holes about 21/4 inches in diameter.’ (P. 269)

‘These Highlanders are in a true succession of their heroically enduring forefathers, who, despite relentless persecution, kept true to the faith of the church. For in a field near by the present Loch Leven Hotel is Carnglas, supposed to have been once the site of a Columban church, and here the forefathers of the present Faithful Remnant used to assemble secretly to receive the Blessed Sacrament. The officiating itinerant priest disguised himself in a grey suit, and a sentinel was posted on an eminence commanding the Fort William road, to give warning if any soldiers were approaching.’ (P.272)